A native of West Hempstead, New York, Rabbi Ezra Goldschmiedt joined Sha'arei Torah in 2013, becoming our synagogue's first rabbi. Rabbi Goldschmiedt graduated with highest honors from Yeshiva University in 2008, where he went on to receive his rabbinic ordination and a masters in Jewish education. Over the course of his studies, Rabbi Goldschmiedt served as a research assistant in Yeshiva University's psychology department and Azrieli Graduate School, while also taking on teaching and rabbinical roles for the DRS High School for Boys, Mount Kisco Hebrew Congregation and Aish Connections. Since his arrival in Cincinnati in 2013, Rabbi Goldschmiedt has fully committed himself to CST and its members.  He has recognized the needs of our community and provides pastoral counseling, classes, and guidance in religious practice, to our members. He also makes every effort to represent CST communally while collaborating with the larger non-Orthodox Jewish community.
​
Prior to joining Sha'arei Torah, Rabbi Goldschmiedt served as the rabbinic assistant of Congregation Beth Avraham Yoseph of Toronto (BAYT), and as a fellow of Toronto's Yeshiva University/Torah MiTzion Beit Midrash Zichron Dov. 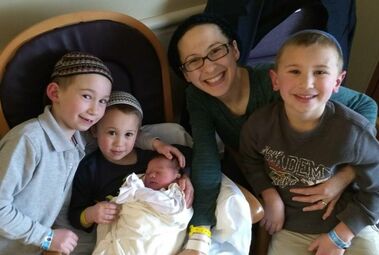 Originally from White Oak, Pennsylvania, Elyssa graduated with highest honors from the Blitstein Teacher's Institute in 2006, and received a BSN in nursing from Rush University in 2008. She has worked as a nurse at Beth Israel Medical Center in New York and Moshava Ba'Ir of Toronto. She currently works as a nurse at Bethesda North Hospital.

​The Goldschmiedts are the proud parents of four sons.